Warcraft III originally released in 2002 during a time where RTS’s were arguably at the height of their game. While the occasional real-time strategy still releases nowadays, most of the gaming crowd has moved on towards more reactionary games like Call of Duty, or the many popular battle royales that have popped up over the last few years. Even fans of the Warcraft IP are probably more acclimated to World of Warcraft rather than its original roots. In 2018, Blizzard revealed that they were bringing back the classic RTS in the form of a remaster called Warcraft III: Reforged.

Before we get into the game and my opinions on it, I want to address the latest controversy Blizzard is feeling with the recent release of Reforged. If you haven’t heard, the game is currently under a lot of fire with complaints about downgraded cutscenes, online rights issues, how it affects the original version of the game, and other issues. These issues have led to the game being review bombed by users on Metacritic, where it is currently sitting at a 0.5 score during this writing, making it the worst-rated game of all time. By no means do I think it is that bad of a game, but the fanbase is feeling betrayed by Blizzard yet again. For reference, the critic score is 60.

Let’s start with the downgraded cutscenes. When compared to the 2018 reveal trailer, there is an instantly noticeable difference in quality between what was shown at Blizzcon and what is available today. According to Blizzard, the change in cutscene quality was to not compromise the classic look of the game. If that is true, why even make a remaster? To me, at least, a remaster is meant to bring an older game up to current graphical standards. While the character models and world are instantly noticeably better, why not push that drive for quality forward with the storytelling in the cutscenes? If you wanted to keep the game looking like the original version, what was the point of remastering it when the original is still playable? That argument doesn’t make sense to me. 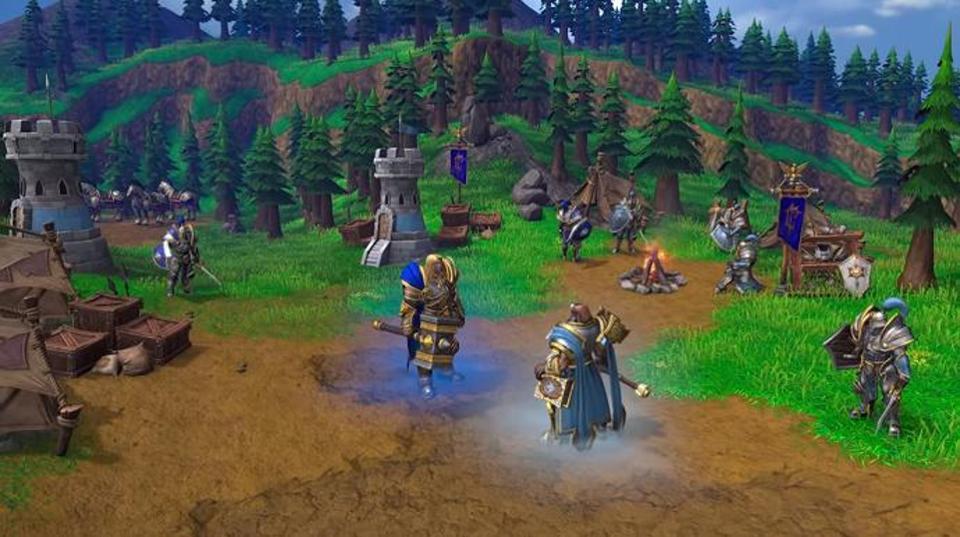 With so much going wrong with the game, I want to acknowledge that yes, there are issues. Blizzard did not fully live up to its promises and couldn’t even give an update on the game since the 2018 Blizzcon. Besides the online beta starting at Blizzcon 2019, I want to say Warcraft III Reforged was a no show. I feel plenty of the current issues they are facing would not be as big of an issue if they were more upfront with the fans or simply delaying the game could have fixed so many issues.

Blizzard’s reputation has taken a huge hit in the last few years. What once was considered one of the best gaming companies out there is continually losing its fans. Hopefully, they can turn it around, but they need to start with being more open to the fans. Now onto the actual review.

A Classic Brought Back The original Warcraft III: Reign of Chaos was something completely new to me when I was ten years old. I have never been much of a PC gamer, but my friend introduced me to this game where I built up an army to fight another one and I was immediately infatuated. Choosing between Humans, Orcs, Night Elves, and the Undead was so interesting to me. Each race plays very differently than the rest. The game also hit that fine line where it was easy to pick up but hard to master. I might never have been particularly good at any online match, but I was always having fun playing the game. That would lead to me playing offline matches more than anything, but the experience never got old. That aspect of the game still very much lives on in Reforged.

The campaign makes its return as well, which I enjoyed playing through once again. There were a few moments I didn’t recognize while playing so I am not sure if that was due to Blizzard adding things to be in line with WoW or it being well over a decade since I last played. Regardless, it is a basic storytelling experience that feels like it came from the early 2000s. As I said above, dedicating to the improved cutscenes could have gone a long way to making it feel more modern. The animations are basic, the voice acting is still so-so, but the character models do look better at least. It could have been pushed much further, though.

As I said, I have always been terrible at playing this game online. I can’t recall winning one time. That streak continued while playing Reforged. Versus matchmaking was hit or miss for me. Some matches I would connect successfully, but there were slight stuttering issues throughout. Other matches I couldn’t connect at all.

Custom matches were more of the same. I have always enjoyed the community’s creativity, and it was a blast seeing some of the classic modes I would play back in the day make their return. However, connecting to custom matches was even harder than normal matchmaking. I was constantly kicked from lobbies before I had a chance to see them. This was disappointing to me because there are truly great games on there. Connectivity issues are common when a game first releases, and sooner or later, they will be resolved, but it is still not great when you can’t play certain aspects of the game.

Four Armies All Worth Playing While the orcs are my favorite race to play, all four armies are worth your time. Each race has their special units that differentiate them from the others. For example, human peasants can work together to build a building faster. The night elf wisps do not need to travel back and forth when collecting lumber, and each race has their heroes that can be leveled up and taught new abilities.

Every race in the game has its merits and diverse personality. No matter who I choose to play, I know I am going to have a good time listening to my unit’s voice lines and take advantage of each of their strengths. If you have not played Warcraft III before, you will fall in love with these characters like you fall in love with any other Blizzard character. I cannot think of a single unit that feels like a copy and paste of another. Come for the colorful characters, stay for the strong real-time strategy mechanics. In conclusion, Warcraft III: Reforged is another headache for Blizzard because they were not open with the fans about the direction of the game. For a game released in 2020, it doesn’t particularly look amazing, but it does look better than 2002.

Until the connectivity issues are fixed, I cannot recommend anyone serious about this type of game to purchase it. If you are like me and fine playing by yourself, then you should find plenty of enjoyment playing against the computer. Once you make your way to the campaign, you will find a story from a different time, but still passable.

I hope this remaster can turn the public perception around after a little bit of time. It is still a classic that (when working) is a brilliant game that I love to this day. There’s a lot to love here, but when you throw in the new custom game rights issue along with broken promises and connectivity issues, it makes it hard to say this is the definitive way to play this game. It is made worse because the original version of the game is dealing with the same issues because they are intertwined. Maybe give this game some time to fix itself, but as of now, I cannot give Warcraft III: Reforged a glowing review.