My time in Concrete Genie was mostly spent goofing around with a giant paintbrush, doodling stars, tulips, and moons across every blank space of wall. The game is as tranquil as it is heart-warming. Although the bulk of the gameplay lies in lathering the dilapidated town of Denska in a fresh coat of paint, it is executed wonderfully.

Concrete Genie is a PlayStation 4 exclusive that was first announced during a broadcast of State of Play, Sony’s version of Nintendo Direct, earlier in the year. It was developed by Pixelopus and released on October 8th 2019.

Concrete Genie‘s protagonist is Ash, a shy young boy with a keen eye for art. His beloved town, Denska, has been tarnished by a mysterious gloopy substance called “The Darkness.” The once bright and populous location has long been abandoned by its inhabitants due to this pollution.

If Ash’s worries weren’t enough, he is also subjected to constant harassment and bullying from a group of kids who have little respect for the town or his art. These mischievous youths sneak up behind Ash as he’s making some finishing touches to a drawing. After mocking and teasing him, they then proceed to tear up his sketchbook and scatter the pages all over town.

Ash makes his escape via a rickety old tram and finds himself at a lighthouse. Here, he finds one of his drawings, a genie named Luna, come to life. After coming across a magic paintbrush, Ash vows to mop up the darkness in Denska and restore the town to its former glory.

Pretty as a Picture

The core of Concrete Genie‘s gameplay is painting, collecting pages, and creating genies to help you solve puzzles and access more areas. You’re limited to a set of pre-made drawings, so you don’t have full-reign of what you can create. But if you can’t draw to save your life, it does mean your art can never look bad. The number of things you can draw is impressive and never feels too linear or constrained. Branding a surface with a series of tulips, mushrooms, vines, and a handful of birds for good measure is a sight to behold. But then adorning it with a rainy backdrop and a glistening full moon turns it into a masterpiece.

I never once got bored doodling in Concrete Genie. The designs look phenomenal and always had me rooted in place for a few moments to admire my handy work. The visuals are a highlight, and it’s definitely one of the prettiest games I’ve played on the PlayStation 4. Even the character models are endearing, with a somewhat paper-look to them, not dissimilar to Tearaway.

The music goes perfectly with the art style, adding a deeper layer to the game’s atmosphere. You also get these sound effects when you paint. There’s a twinkle when you place stars or the pitter-patter of raindrops when you, like you’ve probably already guessed, add a rainstorm to your drawing. It’s little nuances like this that really capture Concrete Genie‘s charm.

Painting in Concrete Genie is done via the DualShock’s motion controls, which is a feature most games don’t take full advantage of. You move your controller to where you want your drawing to go, and then use the touchpad to draw after you’ve selected your design. The motion controls are a little fiddly until you get to grips with them, and some of my earlier artwork looked a little wonky as a result. They get easier with time and eventually become quite fun to utilize. There is an option in the settings to turn off motion controls, too, so you can use the analog sticks to draw instead.

To progress the story, you need to use your painting skills to activate lightbulbs that are strewn across multiple surfaces in each area of the town. There are four locations in total: The Lighthouse, The Fishing Port, The Hydroelectric Plant, and The Waterways.

Once you’ve powered up all the lightbulbs in an area, you can then access a new place. Each location has the same dark, gloomy sheen, but your paintings breathe a new wave of life into them.

In addition to the main story, there is a Free Paint mode you can play around in, which allows you to paint with all the designs you’ve previously unlocked. There’s also some extra content and quests for owners of a PlayStation VR headset. You can’t play the whole game in VR, but it’s a cool bonus nonetheless.

Your creativity isn’t just limited to drawing, as you’ll also need to design genies to help you on your journey. There’s a lot of creativity when it comes to making your genies as there are a lot of design options to choose from, like different body shapes, tails, horns, and arms. 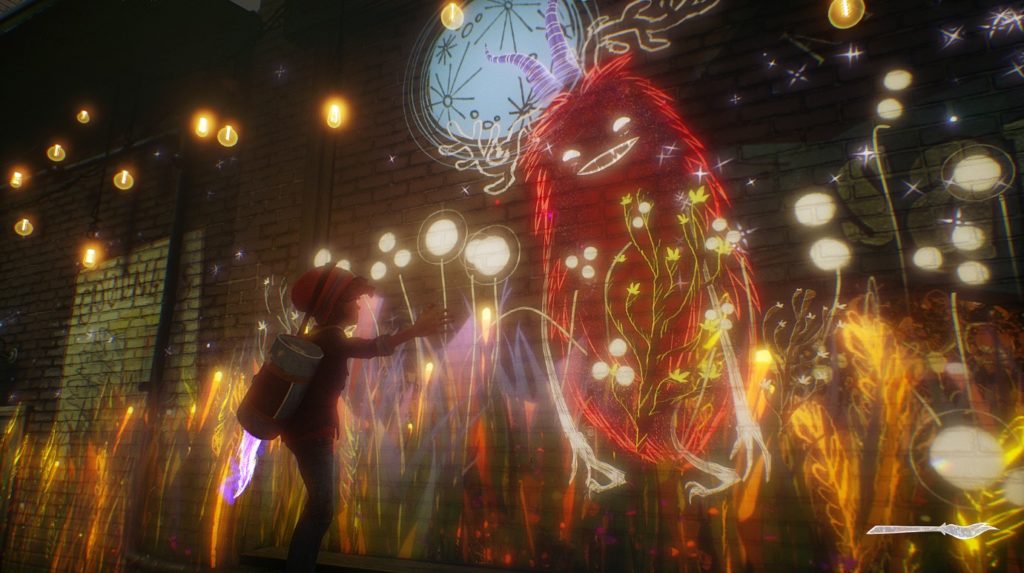 Genies come in three varieties: fire, electric, and wind. Each genie type has different abilities to assist you with puzzles and story progression. For example, fire genies can burn down tarping, whereas electric genies can activate switches. Sometimes, you’ll need more than one genie to help you with an obstacle.

The genies themselves are full of personality, despite not being able to vocalize anything but grunts. They interact with Ash and his paintings, which is a lovely detail. On one occasion, I drew an apple on a wall to go underneath a blossom tree. As I took a step back to admire my drawing, my genie picked up the apple and promptly devoured it. There are a lot of moments like this, which really helps enhance the game’s charm and world-building.

Genies also have requests for you to complete and will grant you Superpaint as a reward. These side-quests usually involve fulfilling a drawing request or agreeing to play with your genie. Superpaint allows you to draw over the thick purple darkness you see growing over certain surfaces, so it’s necessary to reach some lightbulbs. To unlock more pre-set drawings and genie features, you need to collect various sketchbook pages across each location. Some of the pages are essential to moving the story forward. Others are optional and simply unlock more cosmetics for your genies. A few of these pages are well-hidden, so you’ll need to do some digging if you want to find them all.

There are also newspapers hidden around the town which reveal more information about Denska’s backstory and how it became so polluted.

The Power of the Paintbrush

Throughout Concrete Genie, the bullies who destroyed your sketchbook will pop up fairly frequently to make your quest more difficult. If they spot you, they will chase you until you lose their line of sight or are caught. Being caught by the bullies doesn’t have any lasting repercussions but they will throw you into a dumpster and hide your paintbrush, which you’ll then need to retrieve. Over the course of the story, Ash’s character develops along with his perception of his bullies. In the beginning, Ash is a quiet, unconfident kid who’s completely lost in his drawings. He uses his art as a form of escapism to forget the worries that haunt him.

Towards the end of Concrete Genie, Ash’s drawings aren’t just a safe retreat to hide in, but a tool to overcome his insecurities, while also restoring his town. The bullies’ personalities also shift, and you learn about their own struggles and traumas. Pixelopus’s approach to bullying is done delicately but effectively, which is no doubt due to their storytelling and Ash’s voice actor, who delivers his lines brilliantly.

However, despite all its positives, Concrete Genie does have a few flaws. The first involves movement. Controlling Ash can sometimes feel a little off, particularly when you’re trying to climb over walls and rooftops. It’s not a huge issue but can sometimes result in falling to your death due to a miscalculated jump.

The genies, for the most part, are executed very well, but they can occasionally be a frustration to interact with. I found that the genies didn’t always listen to my commands, especially if I needed to call one over to help me clear an obstacle. It also took a few attempts for one of my genies to interact with a puzzle, such as powering up a switch. When a large part of the game is linked to genies and their assistance, it is frustrating having to continuously wait for them to obey you. Concrete Genie also failed to take full advantage of one of its best features, which is combat. Near the end of the game, your paintbrush becomes a super-tool. It allows you to move at lightning speed, while also shoot magic beams to remove the darkness that has now possessed your genies.

For a feature that’s only present for the latter half of the game, it’s exceptionally well-designed and incredibly fun. It’s a shame it was used as an afterthought and wasn’t a feature from the beginning.

Concrete Genie is a charming and heart-warming experience that not only looks gorgeous but tells an important and intriguing tale at the same. It might not be as action-packed as other games, but simply painting a pretty picture and watching it come to life is a joyous feeling, even in its simplicity.

The game excels in its visuals, painting mechanics, storytelling, and music, but falls a bit short on its controls and underutilized combat mechanics. The game is fairly short. You could probably speed through it in five hours, but it’s definitely an experience you want to take your time with.

Whether you’re a talented artist or as unartistic as they come, Concrete Genie is a lovely little game well worth your time. And even if you hate art with a passion, Concrete Genie might just change your mind.