The obvious answer is, of course, gaming device. But putting aside that logic and just looking at the interesting other features that the DS (and the DSi) actually deliver, one might actually think that they are tinkering around with some random gadget that is right at home at your office desk. So, have tried checking out what you can do with the DS aside from playing games? 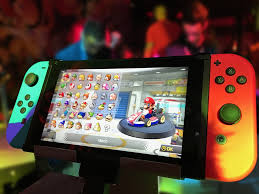 First off is the clock mode. Okay, for those wondering: it is a dedicated function or mode of the NDS and is readily available from the touch screen menu after you turn on the device (it is on the screen right after the initial warning advisory page). In this mode, the only thing that the device does is show you the time. Not really all that useful since you will be wasting batteries and there are plenty of other time-telling device that use energy in a much more eco-friendly manner. But yes, you can if you want to, and there is even an alarm function for users who simply feel like leaving the device plugged into the charger the whole night.

Pictochat is a much more useful function though its practicality still borders on sheer novelty and entertainment. This is basically a scribbling program that you can use to interact with other DS devices. The picture chat content makes full use of the touch screen for users to share their creations with each other. Sadly, there is no way to save the images you create so enjoy them while they are still there on your screen. Both Pictochat and the clock mode will require you to switch the DS off and back on in order to access another function (or the game cartridge).

In late 2008, Nintendo launched the DSi, an upgraded version of the dual screen handheld. This new model sported several new side features that provided users with further functionality.

Among the most noticeable is the addition of two VGA cameras, one inside and another on the outside. This allowed users to take photos of the people and things around them or if they wanted to, their own selves. The images could then be stored on the new SD card slot or uploaded to a Wii console. Speaking of the SD card slot, the DSi also allowed for the playback of several media file formats, such as MP4 and 3GP recordings (but it still lacks MP3 playback capabilities)

And making full use of the DSis internal WiFi capabilities, support for access of the official Nintendo WiFi service has been added to the device. This allows players to link up online for multiplayer games or for downloading DSiWare software. These can either be small games or useful applications for the device.

Overall, we are pretty happy with how the DS functions even without the game. While a little bit more of functionality in terms of file format compatibility or the option to store game saves on the SD card would have been nice, theres already a lot being offered by the DS system on its own. All you need to do is tinker around and see for yourself.