Originally announced during E3 2014, Crackdown 3 has been one of Microsoft’s biggest games with a troubled development. For a game series that has had decent success in the past (on the Xbox 360), you would hope that the long wait and the jump between console generations would mean a boost in enjoyability. Unfortunately, Crackdown 3 feels much like the original game that released in 2007 with barebones innovation and mindless gameplay.

Crackdown 3’s story revolves around the agent you choose working to take the evil Terranova Corporation that has its grips on the city the game takes place in. The story is nothing amazing, but for a game series like Crackdown, its fans are not here for an engaging story. That doesn’t mean though that I cannot point out its flaws.

The narrative is delivered to you through what is communicated to you from Echo and the director of the agency. Aside from the opening with Terry Crews being Terry Crews, there are no cutscenes. This also brings me to the inclusion of Terry Crews as the main marketing material and the main agent of the game. It was a great move by Microsoft to get him in the game. Terry Crews’ explosive personality perfectly fits the kind of feel Crackdown strives for. The inclusion of Crews though probably takes away the need from having any other agent in the game though. Anyone who knows Terry Crews from anything he has been in is not going to select any of the other playable agents. There are slight stat boosts for each agent, but it’s so incremental, that there is hardly any point to choosing anyone besides someone as charismatic as Crews.

The antagonists of Crackdown 3 are just as forgettable as the other agents outside of Crews’ Jaxon. Each member of Terranova oversees a specific industry in the city. There’s an AI that controls the monorails, a person addicted to radiation mining out a specific element, and more. As you progress through the game, at any time you can pull up a layout map of the organization. A lot like Ghost Recon Wildlands, you are taking out the lower members of the organization to get to the higher-ups. Whenever I saw this screen though, it made me think of how much better a game like this could be with the nemesis system that became popular with Shadow of Mordor. It made me want to play that game more than playing Crackdown 3 because I find it to be a much better experience hunting down members of the group there as opposed to here. Another problem with the story is the volume mix between dialogue and everything else. Once you pass the beginning area of the game, you are introduced to the director of the agency as he has a conversation with Echo. This entire speech I was straining to understand what he was saying because the music in the background was covering everything he said. This kind of interruptive performance happens a lot throughout the game. I cannot remember a single dialogue from my character that I remember hearing clearly. Again, the story of Crackdown 3 doesn’t matter overall, but regardless, it’s not good. The gameplay of Crackdown 3 is by far what has sold the series in the past and what people have been looking forward to the most for this entry. Let’s start talking about the campaign since that is widely recognized as the best mode for the game.

Crackdown 3 feels much like the original Crackdown did. Shooting is as simple as holding the left trigger to lock onto a target, kill them, rinse and repeat for the majority of the game. That game revolved around upgrading your agent to become a superhuman like agent for taking out the crime in the city and the same system is seen here:

Shooting and killing enemies with guns give you blue experience towards firearms that unlock new weapons that can also be found within the city itself.

Using grenades and other explosives give you yellow experience towards various explosive upgrades.

Driving through stunt rings, completing races, running over enemies, and other driving-related tasks give purple experience towards upgrading the agent’s car.

For any fans of the original Crackdown game or collect-a-thon games in general, this is going to be the main selling point for you. Leveling your agent gives slightly noticeable boosts to how your agent controls while you play. In the beginning, you have one jump and mostly will rely on climbing buildings to traverse the city. After a few level ups though, you will be jumping to the top and air dashing to your next objective. Crackdown 3 largely feels like a game of being handed a big list of small things to accomplish, and as you complete that list, you are made a little better because of it. Some abilities are easily more useful than others, however.

After my first few hours of playing the campaign, I did not feel a need ever to call my car in. Jumping across the city just felt like a better way to travel than driving a car ever did. Anyone who played Saints Row IV will know what I mean here. Why even include cars for me when leveling up my movement both feels and controls better than in any automobile you provide me? 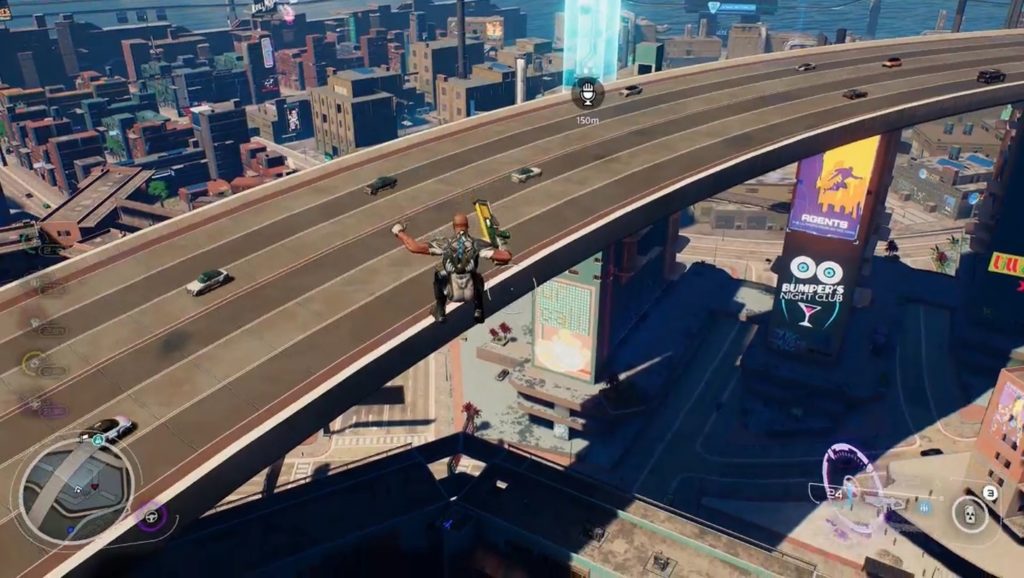 Melee was also a down point in the gameplay for me. Using guns and explosives was always the go-to for me in combat. I enjoyed trying to pick up every gun to make sure I would have it in my stash, and they are always better than fighting someone with your fist. Punching an enemy with the same three punching animations continuously did not do it for me. Not when I could carry a homing RPG, a gun that fires four grenades at one time, plus an assault rifle that lit enemies on fire. They kill enemies faster (which keeps you alive because killing enemies restores your health) and are far more pleasing to combine with the upgraded movements of agility orbs.

The objectives laid in front of you to bring out each boss are very repetitive. Littered throughout the map are objectives that require you to do some degree of shooting or blowing up equipment. Sometimes the game will throw a curveball at you and require you to jump up a building and shoot something with the lock-on mechanic. Within two hours of playing the game, you could see about every mission the game will have available for you. At no point does it evolve with your abilities upgrading or change to keep things fresh.

The multiplayer mode of Crackdown 3 is called Wrecking Zone. This mode features two different games, Agent Hunt which is kill confirmed from Call of Duty, or Territories which is King of the Hill. Wrecking Zone has the fully destructible city that the game was boasting having when it was first announced years ago, and the end product is a tech demo in its best moments and completely forgettable at any other time.

When compared to the city in the campaign, Wrecking Zone looks completely bland and boring. The same lock-on mechanic is brought to multiplayer which completely takes any skill out of the game.

The most egregious thing missing from the multiplayer is the ability to play with a friend. In 2019, how do you make a multiplayer mode, that cannot be played in a party with friends? If it were Nintendo we were talking about, I would understand because they make bad decisions like this with online modes all the time. It is something we are used to with them, but we are talking about Microsoft here, the company who made Xbox Live and truly pushed online console gaming over a decade ago.

There is not much more to say about Wrecking Zone honestly. It is a tacked-on multiplayer mode that should have been scrapped years ago. That destructible power would have been much better suited in the campaign. If the game was delayed multiple times because of this mode alone, it seems the developers were never able to find a way to make it work or simply fun in any way. Wrecking Zone is a completely unacceptable inclusion for this game. 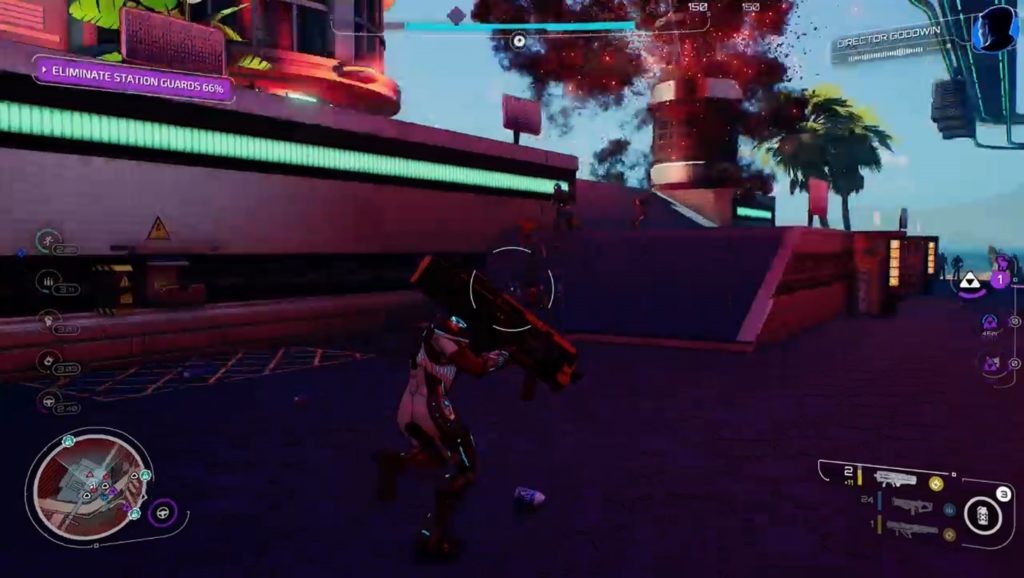 Playing on an Xbox One X, the Crackdown 3 campaign runs well. I did not notice any terrible stutters or frame drops, and while I think the city seems “meh” overall, I like the designs of the characters and the weapons. Vehicles look horrible though; you could easily mistake a car in Crackdown 3 for being copied from some box looking car from an original Xbox game or at best an early 360 game.

At nighttime, the city lights up with all its different neon colors, and the many holograms throughout the world give you the feeling you are in a futuristic city. As noted above, Wrecking Zone looks bland, and that’s all to say on it.

Crackdown 3 is a game that feels like a game we all played 12 years ago. Any fans of the original Crackdown will have fun with this game because it is the same thing essentially. After so many delays, you would hope that the developer Sumo Digital would try something new with the series with it being the third installment, but in the end, this might have been better off being marketed as a reboot of the series or making a remaster of the original would have been better.

It does not feel different enough to justify being a sequel, and the Wrecking Zone multiplayer should not have been released in the state that it is in. People looking for mindless shooting and exploding fun could have fun with it, but some games came out on the last generation of consoles that did it better. In fact, I would say that everything that this game does, another game in the past has done better. Even being a huge fan of cooperative games, I would recommend playing the campaign alone. It is perfect for when you want to play a game and not think about anything. That is just the kind of mind-numbing game Crackdown 3 is. It is not bad, far from it. It’s not good though. It sits in a very “meh” zone where the people that enjoy this niche will love it, but that is it.

I could not recommend anyone buying this game at its full $60 price tag. If you have Game Pass, this is the perfect game to give a try to see if you like it, but until it goes on a big sale, I would not recommend purchasing it.