The Latest Battle Of The Gaming Consoles

It seems almost like a Christmas ritual: there’s a Next Big Thing in the video game world almost every holiday season. Last year featured a particularly interesting competition between the new gaming hardware put on the market by Nintendo and their prime competitor, Sony with its PlayStation series.

The Sony PS3 is the high-end, bells-and-whistles choice between the two. It includes high-definition graphics, a hard disk, and a Blu-ray Disc drive that delivers great image quality. The top tier 60GB hard drive version also includes a hefty $600 retail price. Nintendo’s Wii (pronounced “we”) costs $250 and builds in Wi-Fi (but not ethernet). Like the PS3, it has an SD Card slot and can display photos, but its standard-def DVD drive can’t yet play movies (Nintendo and Sonic Solutions are working on that). 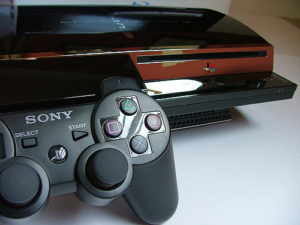 What Nintendo does have that keeps it in the game is a unique gaming remote device (the Wiimote) and an enormous library of games. The PS3 enters the market with significantly more horsepower and better graphics, but their game options are, at this point, fairly limited. Wii came on the market with 62 games available; the PS3 opened with an inventory of 20 games.

PC World’s review provides a clean portrayal of the difference between the two systems. The graphics on the PS3 are state of the art 1080p high-definition and present a new level of quality for gamers. The Wii’s graphic capability is limited to standard definition, which is equivalent to the PS2, Sony’s last (and highly successful) video game console. However the Wii has a remote gaming control that utilizes motion-sensing technology, so that the gamers’ motions with the remote are mimicked in the game. If you’re playing football, a pass requires a passing motion with the remote. A sword fight will require a little air-fencing as part of the game participation.

The intuitive nature of the Wii remote is its strength, along with the relatively inexpensive cost compared to the PS3. Wii also has an additional controller called the Nunchuk which is a joystick-type device that works in conjunction with the motion-sensing remote.

The graphics and multiple uses (the PS3 includes a Blu-ray HD DVD player) are what make the Sony product attractive. When they both came on the market, the fact that each relied on separate characteristics to define their value has made for an interesting market contest.

The PS3 is the high-horsepower (and high priced) option on the market. It can handle HD DVDs, play back your digital photographs, and connect to the internet with a built in browser. Its graphics are unparalleled, and it comes with a decent game inventory that will at least get you started. It too has a new controller, one that utilizes a tilt feature that is a token effort at motion sensitivity.

With the Wii, Nintendo decided to forego the digital video wars and focus on a simple box with unique controls that is designed for fun. The Wii can play GameCube games (Nintendo’s last offering) and has been introduced with a new addition to the chart-busting Zelda game series. While the Wii hasn’t done much to upgrade the visual quality of the gaming experience, it has added substantial new dimension to the gaming process itself. It too can be utilized for web access.

Nintendo’s decision to target so-called “casual gamers” seems to have paid off in the short run. It’s too early to pick the long term winner; both companies limited their Christmas product issue in order to ensure sellouts and high product demand. The PS3 definitely has a price-break issue that will offset some gamers’ lust for the best graphics out there. On the other hand, it’s a system with a great future. Wii’s future is now, for the most part, and the product issues an intriguing invitation for a substantially new gaming experience, even if it occurs using last year’s graphics.