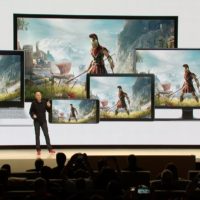 Google announced its new game streaming platform at the Game Developers Conference in San Francisco today. The mega company’s first dip into gaming is called Stadia and will support any Android or Chrome-based device. The service was shown off being able to instantly transfer your play from a laptop, to a phone, to a underpowered PC, to a tablet, to a television with a Chromecast. The translation seemed seamless during the presentation, only taking a few seconds for the person playing Assassin’s Creed Odyssey to move from […]