With the release of three major brands of the PS4 in the market, one should be confused about a better version. The PS4 Slim and PS4 Pro are no doubt, a better and superior upgrade of the Sony console.

After the release of the PlayStation 4 in November 2016, Sony brought a new generation of the console. The PS4, PS4 Slim, and the PS4 Pro seem alike, but each has a distinct feature and property that makes it outstanding, and these simple features are what I’ll be breaking down today.

Why the Revision and Upgrade?

To really get a detailed information on the best amongst these consoles, we’ll have to consider the major reason for this upgrade;

If you’re following the Sony company before now, it’s notable that for every console generation, they come up with an upgrade or I should say slightly distinct version; the “slim” (just as in the time of the Play Station 3 which had the PS3 slim and PS4 Super Slim revision).

The “slim” version of these consoles will always have a similar tech, but with a superior compact and power-efficient frame.

With the growth of the 4K TV market, the Sony Company had to augment with the ongoing trend to see that she doesn’t get lost all way back, so they developed the PlayStation 4 Pro.

Let’s consider the PS4, PS4 Slim, and the Pro so we’ll be getting a better view of some of these modifications and know what features you should consider before getting one.

Check out this table for their specifications, features and price list;

Using the PS4 as a case study, here’s an analysis of the PS4 Slim and Pro versions.

The Major Difference between the PS4 Slim and the PS4

The release of the PS4 slim in November 2016 ignited a curiosity for every person that owned the base PS4 model of 2013, but shockingly there was an immense specs similarity between the revision and base with several small differences.

There is no modification on the graphical fidelity or performance, but you can notice some changes in the body structure. The PS4 “Slim” as the name implies, is way slimmer than the PS4. The PS4 Slim features a 11x10x1.5 inch chassis and compared to the original’s 12x10x8.2 inch case. This chassis reduction is coupled with a 1.6 pounds relief, giving it a 4.6-pound weight in total.

The PS4 Slim features a completely matte black look which replaced the original half-gloss finish of the PS4 base. The edgy design of the PS4 was modified to round corners.

Other underlying improvements include the PS4 Slim compatibility with 5 GHz Wi-Fi and Bluetooth 4.0 support unlike the 2.4 wireless band of the original console. The original console is less power-efficient and the wireless audio performance is not a match for the Slim.

The Slim features a USB 3.1 support which us twice as fast as the PS4’s 3.0 ports. Also, the slim features a 165 watt thermal design, whereas the original is rated to consume 250 watts. So coupled with the power efficiency and cooler and quieter function, the Slim is at advantage than the original.

In addition, the Slim comes with a 1TB hard drive and updated technology.

Of all these improvements, the only setback of the Slim over the original is the removal of the SPDIF port, which affect sound bars that’ll demand an optical connection.

It’s obvious that there isn’t much difference between the PS4 and the PS4 Slim revision, but it’s not the same for with the Pro.

The PS4 Pro upgrade features a significant boost in processing power, performance and all around. Just as I’ve mentioned earlier, Sony released this revised version to take advantage of the burgeoning 4K TV that had already gone mainstream in the market.

The 4K TV features a resolution of 1080p, but the original PS4 doesn’t support this quality. The PS4 Pro meets all these necessary requirements a 4K TV demand to efficiently function.

In addition to the 4K, the PS4 Pro offers many underlying improvements ranging from a 4.2 teraflop GPU that’s clocked at 911MHz and based on AMD (this is 220 percent the Slim) to a 2.1 GHz frequency which is 500MHzfaster than the PS4 Slim. All this, in conjunction with the 8-core of GDDR5 memory, and the 1GB of conventional DDR3 RAM to bolster 4K video streaming applications.

Sony PS4 Pro revision comes with a hard drive and 1 TB allotment twice the capacity of the PS4’s HDD.

The PS4 Pro offers a bigger and heavier design than the original PS4. It comes with a 11x10x1.5 inch dimension, weighs 7.2-pound weight and still maintains its slanted design of the original model, but with rounded corners, similar to that of the PS4 Slim.

The power LED light bar at the front gives the PS4 a chic design, including the SPDIF port which was not available in the PS4 Slim – so you can rock it with sound bars that’ll be requiring an optical connection. Sony still maintained the USB 3.1 ports they introduced in the PS4 Slim but this time around there’s three of it.

If we should be considering the price, the PS4 Slim and PS4 Pro were both launched the same year, but the Pro had a price launch of $400 to the $300 price of the Slim (the same price with the original model).

The original console is no longer in stock or production, but you could get it second-hand or a refurbished one. Prior to that, you should know the Slim and Pro still maintains there release price.

Before you’ll be giving any final verdict, there are some certain things you’ll have to put into consideration, and they include:

After laying much emphasis on the 4K TV features, one needs not to be told that the Pro is the best fit for it. But if you still use a 1080 display, don’t bother purchasing the pro because you won’t be getting a better graphics or 60 FPS, instead, you’ll be getting supersampling, slightly better effects, and sharper texture. Nevertheless, that’s almost equivalent to the Slim vision.

Every difference and upgrade available in all these versions of the console hovers around, a fact, and that’s the game and streaming capabilities.

The Pro features the 4K capabilities, but you’ll be saving more if you go for the Slim or even the original 2013 release, which you’ll be finding a cheap and fairly used one.

In a brief, you should opt for a PlayStation 4 Pro if you have a 4K display or a better improvement to the 1080p performance. If not so you’ll have to get the Slim; especially for a limited and tight budget. 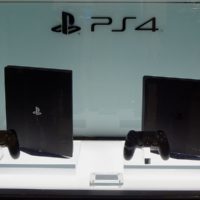