For the most part, the handheld console market has been heavily divided between the Sony PSP and the Nintendo DS. Together, these two devices literally controlled the industry, and despite the advent of app gaming for smart phones, game developers know that if they wanted to produce big games, it would be on either one of these two.

Of course, there is a distinct difference between the two devices and while the ideal is to have both (and have access to both gaming libraries), one simply cannot help but compare. So here it is: the PSP vs DS showdown. 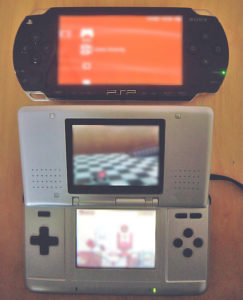 One of the biggest arguments that DS owners make is that the later versions of the DS matches that of the PSP. However, on a side by side comparison, the only DS to get a leg up is the DS XL –which offers a larger screen (there is no PSP version with a screen larger or smaller than the original). However, even this is not that big a deal, the PSP’s screen size is still packing a higher resolution. Other features such as the DSi’s browser, media player and camera have all been available since the first PSP device –though the camera is an external attachment that hooks up on top of the PSP. To match the DS’s microphone, the PSP introduced a mic jack for the PSP-2000 model and a built in mic for the PSP-3000.

Sony’s PSP brings to players a directional pad, an analog nub, four buttons and two shoulder buttons. The Nintendo DS makes use of a resistive touch screen instead of a nub. While the DS has an advantage of a second screen, the fact is that most games hardly utilize the secondary screen for any worthwhile purpose (nothing that a pop-out menu on a single screen layout could not change). And even titles that seemed reliant on the touch screen (GTA: Chinatown Wars, Knights in the Nightmare), eventually were ported to the PSP without any control issues. The big drawback for the DS is that they did not make use of a capacitive touch screen (in fairness, the technology was not common back then). Since players would need to hold a stylus with one hand, supporting the entire device with the other hand became slightly difficult. This was especially the case for the first edition of the NDS which was particularly heavy for just one hand.

Right off the bat, the PSP’s better with its’ quick hibernate mode and simple controls. As with any device that makes use of a stylus, DS players have to be mindful of where they place their sticks. The quick hibernate mode gets a special mention since you never know at what point in the game you will be when your train reaches your stop. While placing down the lid of the DS sets the game into sleep mode, the battery drain is strong. The PSP allows players to quickly press up the power button and send the entire device into hibernation. This lets you head off the train, get to work/class and return to your game at the exact point where you left off later in the evening. With the DS, you’ll be praying the whole time that the battery does not run out.

There is no lack of casual gaming titles for both devices. But with established hardcore titles, the PSP has a much larger library. So far, Nintendo has been doing great with many of its big-name first party developed games such as the Pokemon series, Metroid and innumerable Zelda and Mario games. With third party developers however, Sony has more to offer. Capcom’s Monster Hunter series pushes the PSP’s connectivity features to the forefront by emphasizing multiplayer gaming (other such games include Namco Bandai’s Ace Combat X2 and Godz Eater Burst, Sega’s Phantasy Star Portable series, Square Enix’ Lord of Arcana, and Konami’s MGS: Peace Walker). Other major franchises such as the “City Stories” for Grand Theft Auto also appear on the PSP as full games as opposed to the sprite based mini-games that appear on the NDS.

While this may seem one-sided, the NDS is not without its good points. But for the most part, there is very little that the Nintendo device has to offer for the hardcore gaming market. As we mentioned above, a gamer’s true ideal still lies in being able to get both systems and play all the great games available!