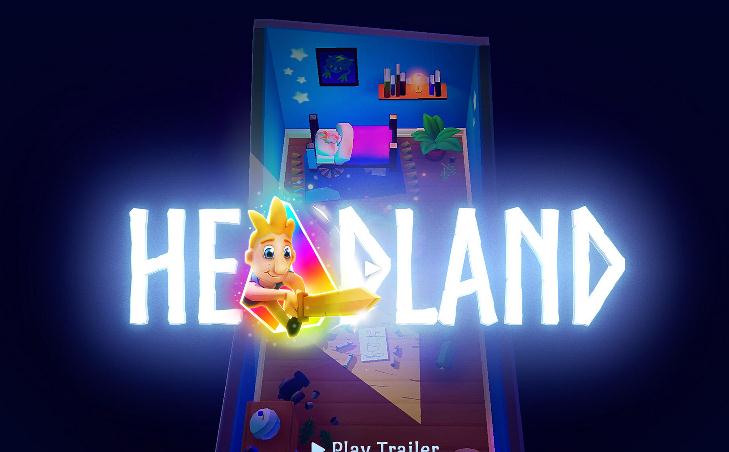 iOS And Android playable demo with paid unlock. The opening screen in plain text, ensures that you know that the game is around six hours long but only the first 45 minutes are free. This is one of the better aspects of Headland.

The fictional heart of Nor’s Headland is shattered by a strong power. He must locate the pieces with his robot companions and battle to recover his infinite imagination.

The game starts off with Nor jumping into his own imagination via a portal in his room. It is also here that he encounters a number of robot friends, including a vivacious robot called Spud who is having the time of his life. At least, until a hideous worm creature emerges and takes his imagination centre, splitting it into five bits and flinging them across Headland.

Combat using the special swipe and tap based battle method with a host of monsters and discover a totally different spin on the action adventure genre with controls designed entirely around touch that are fast paced yet convenient and easy to use.

Unleash weapons and equipment in arenas and update them through your quest using resources you earn. When you acquire your favourite weaponry you can establish your playing style and rise in strength and might.

⚔️ HEADLAND IS OUT ⚔️

Fast-paced action RPG built around touch in a big adventure about holding on to your imagination.

Our love letter to what mobile gaming could be 💌

Tap into a story full of colourful characters and discover the green meadows, deep canyons as well as dark castles of this huge, magical fantasy world. In a major adventure about clinging on to your imagination you can make companions and face your fears.

Northplay, the company that worked on this game, is a small team whose goal from the outset was to produce a fully fledged product with a fair revenue generation method. The game costs only a small amount to play after the first 45 minutes, which fully unlocks the rest of the game and all subsequent content upgrades.

Headland is really a frenzied action adventure where you can swipe and tap from anywhere on the screen to control motion and attacks with one hand. This reducing the need for an onscreen User interface and frees up the developers to display their stunning, vibrant and complex areas.

Each region of the game is entirely different, full of bots, creatures and monsters, all with different difficulties and challenges.

This is a fairly addictive game that can be completed quickly but if you are eager to complete the game in its entirety, and there is a whole part of decorating the Robot Raft that takes a lot of resources but is only for fun, you could probably play for hours longer by solving more challenges and obstacles to mine resources, smash high scores, and purchase decorations.